The Eton Wall Game – Arguably one of the world's most elite sports. 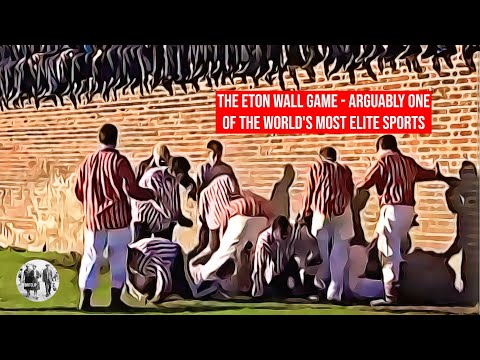 This mishmash of rugby and soccer has been played in one spot at an exclusive English private school … for more than 300 years.

It happens on the same strip of land with a long, slightly curved wall down one side and often devolves into a multi-limbed pile of shrieking schoolboys.

Two teams try to get the ball into a scoring zone, then kick it against a target (a garden door for one team and a tree for the other). Sounds simple, until you realize that the method of actually moving the ball into position involves all the players on both teams piling up along the wall and slowly inching the ball upfield, to the extreme discomfort of any players buried in the pile who’ll spend 30 minutes having their faces slowly scraped along the mortar.

Every now and again, the ball pops free and someone boots it upfield, which precipitates a crazed scramble to retrieve the ball, whereupon the whole process starts again.

The first recorded incidence of the game being played was in 1766, though the most important game of the year is the St. Andrews Day game, first played in 1844.

6 thoughts on “The Eton Wall Game – Arguably one of the world's most elite sports.”