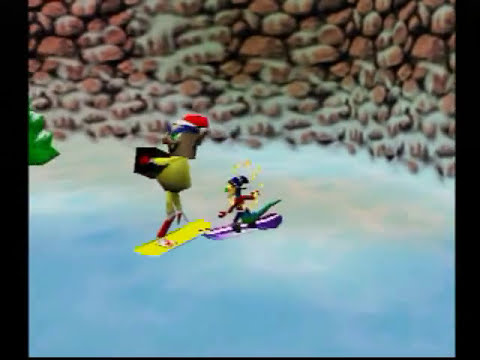 This is a gameplay video of Gex 3: Deep Cover Gecko on the PS1 as played on a PS2 with texture smoothing on.

Now people can finally get off my back about getting a Gex game. I rented Enter the Gecko back int he day, but I was never hugely into Platformers until years later. My main genres in the PS1 days were RPG, and Action.

Crystal Dynamics sure knew how to push the PS1. In fact a modified version of the Gex engine runs Soul Reaver, which IMO is the best looking 3D game on the system. MGS is also great looking, and has the gritty realism thing going for it, but Soul Reaver looks a little better IMO.

Not that graphics matter though, and I’ve only just recently acquired this game, so I haven’t gotten particularly far into it, but so far it has looks (for a PS1 game), and the most important, fun gameplay. It’s not perfect, as with a lot of early 3D platformers, the camera can be a pain at times, but overall, it’s solid on all fronts.

Oh, and I really like having the choice of D-pad vs analog stick. I actually prefer the D-pad in games like this, because I tend to overcorrect with the analog stick. Either way, it’s nice to have the option, because if I need to, I can switch between the two. This footage is played with the D-pad. At least most of it is. Sometimes I subconsciously slip back to the analog stick without noticing because modern gaming’s bias against the D-pad has me default putting my thumb on the analog stick.