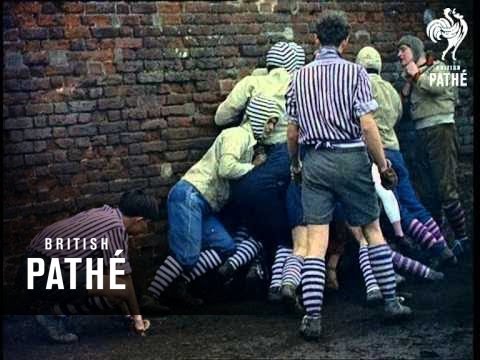 M/Ss of numerous Eton schoolboys walking in the streets around the school near Windsor in Berkshire. M/Ss of a line of boys in striped hats, scarves and socks, and shorts and jumpers; walking across a field with arms linked; the centre boy holds a ball; they walk alongside a wall. Commentator talks of old customs still surviving at the school ” – like the famous Wall Game”. M/S of a crowd of spectators in overcoats; it looks very cold!

C/U of an Eton boy standing with others at the wall; tilt down to show the ball in his hands. M/S of the boys taking off their long stripy scarves and hanging them on hooks on the wall. M/S from the top of the wall as the boys crowd round the referee who starts the game by putting the ball on the ground. M/S of a small group of boys pushing away at the wall; presumably at the ball, in the scrum somewhere; tilt up to show some boys sitting on the top of the wall and watching the game. M/S from the other side of the wall as two boys help another to climb up and sit there.

Various M/Ss from the top of the wall of the boys all pushing against the wall and each other. Commentator explains the object of the game is for one team to push, carry or kick the ball to Windsor, while the other team tries take the ball in the opposite direction. High angle M/S as one boy staggers out from the scrum clutching his head. M/S of the crowd as a boy in Eton school uniform screams encouragement. High angle M/S of the boys pushing each other against the wall – oo-er!

Various shots of the college buildings; statue of King Henry VI in the courtyard, boys and school masters walking about the college and streets around it. More shots of the ‘game’; C/U of Henry, Duke of Gloucester; Prince William is just seen next to him. C/U of a boy in a top hat standing in the crowd next to a young girl. High angle shot of the game and the head clutching boy.

Note: on file are news articles and a rule book about the game, plus a guide book about Eton College.
FILM ID:203.09