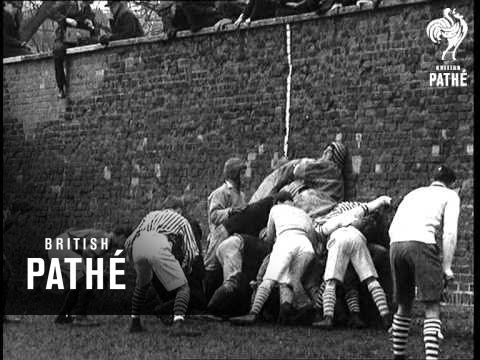 Full title reads: “Eton Wall Game. Best described as ‘All in Football’ – ‘Rugger and soccer’ – as strenuous a struggle as ever on St. Andrew’s Day.”

Pan across crowds gathered on playing fields of Eton. The College buildings are in the background.

Top view of the game when the ball is close to the wall and a hard scrum has formed. It looks as rough and violent as always.

SV of the game, a boy is being pulled away from the ball by the legs.

More views of the rough and tumble game from above. The coverage is quite extensive of this bizarre public school activity.
FILM ID:739.4