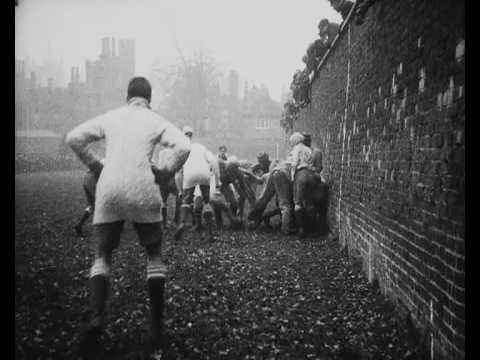 Goodness knows what the rules are to the Eton Wall Game, but judging by this Topical Budget newsreel footage it makes for a far better spectator sport than the average golf tournament. Played every St. Andrew’s Day, it is said that decades have gone by without a goal ever being scored, possibly because there does not even appear to be a goal. Instead the foolhardy players pounce on top of each other with gusto, forming an unruly scrum against a brick wall.

One player known to have taken part in this particular match is a young Eric Blair, who would later become better known under his nom de plume – George Orwell.

All titles on the BFI Films channel are preserved in the vast collections of the BFI National Archive. To find out more about the Archive visit