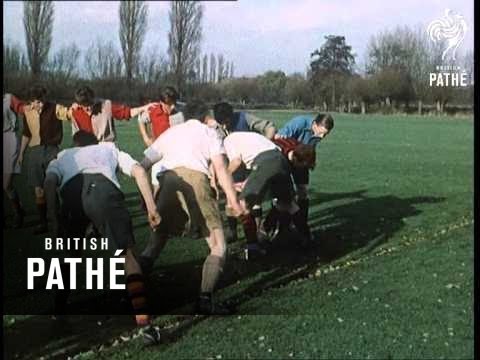 Various shots show boys of Eton College preparing for and playing the ‘Field Game’, which is apparently a cross between soccer and rugby football, with lots of strange rules added in. Several shots of the scrums and then boys running with the ball. In a weird move, one of the boys takes small steps to the side while dribbling the ball delicately; his team mates walk sideways in a line beside him, each with their hand on the shoulder of the boy next to them.

Another strange part of the game involves most of the boys standing in front of the goal with the ball on the ground before them; three other boys stand one behind the other (with arms hooked over the next one’s shoulders) facing the group and jig up and down in unison on the spot before charging towards the ball and boys, creating a scrum – it looks quite comical!

More general shots of the game and young boys watching.

Note: on file is a small booklet giving the rules of the game. Mute neg is badly cut; print used for telecine transfer.
FILM ID:99.19