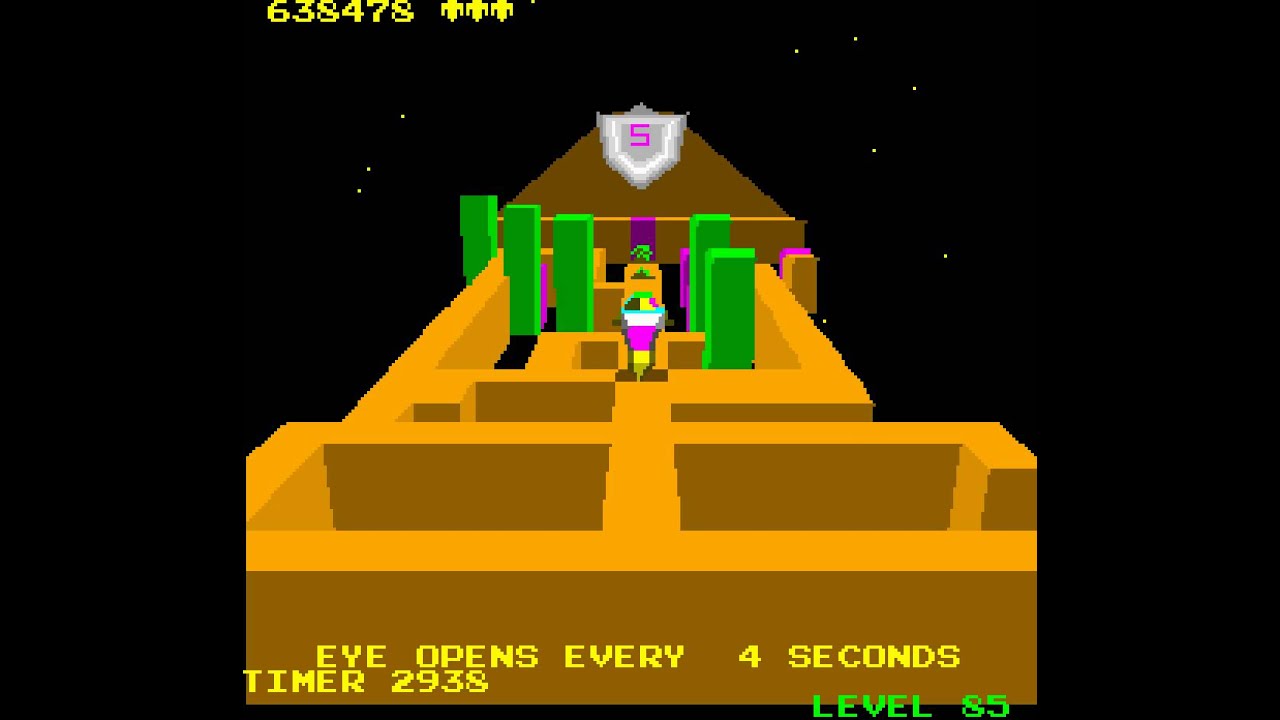 I-Robot is a 3-D Maze/space Shooter game where you shoot the solid objects in space, changing the multi-colored blocks into different colors. You must not jump while the evil eye is visible.You must shoot every spike when battling the human like face. Back in the late 1970s/early 1980s, Atari was the king of 3D Wireframe (vectors) graphics based arcade games.This game was Originally called Ice Castle as a another 3D wireframe (vector-based) game as their answer to Cinematronic’s 1980 arcade game Star Castle was scheduled to release in 1981. But the president of Atari decided to delay the release of the game and want the artists and developers to rework the whole game (as a 3-D driving game but failed so it was reworked again as a 3D maze shooter) since Atari the company itself dreamed of bringing whole new level of 3D graphics to the arcades many years after it learned about the 3-D simulation made by NASA. Not only the design and elements of the game’s graphics were reworked on, also the hardware such as the roms and cpu chips were also reworked. They spend alot of hours sorting through rom and cpu chips to figure out to bring a next level of 3D Graphics unlike the earlier 3D arcade games that used Wireframe (vectors) graphics where used to make them detailed enough to amazed arcade gamers. The President of Atari told the game artists and developers he wanted the flat-angled sides to be colored and shaded and fill the inside to give the game a solid look and feel to it without anything hidden to make 3D graphics a new look through a raster display instead of vector display. So Ice Castle was delayed and reworked on and the game name has been changed. The artists reworked that game’s wireframe (vector) graphics with a color fill program known as a paint program (like a MS Paint and also known as 3D Paint program), which took several months to finish. The game designers spent months sorting through rom and cpu chips powerful enough to make and maintain the game’s new level of gameplay and graphics at solid looking shaded levels. They also spent hours and months of programming figuring out a mathematical calculation that will use matrices and mathematical vectors to produce and maintain the solid shaded look for the games new look for 3D Graphics unlike any videos games you’ve see in the 70s or early 80s. By the time the game’s hardware and design and its graphics were finished (which took over 2 years to develop), the production for the game was successful and built into the arcade cabinet with controls very similar to atari’s star wars arcade game (also released in 1983). They really throw a lot of chips away after the game was 100% finished and very expensive and time consuming to make. The game was later renamed I-Robot. It was later released on December 1, 1983 ( a month after Willaim’s “Blaster” was released). I-Robot was not the world’s first commercial video game with full 3D Graphics(it was Atari’s 1980 game “Battlezone”). However, this makes I-Robot the world’s first commercial video game to have 100 % fully-rendered real-time solid-looking-filled-shaded 3D graphics using 3D mathematical calculation to produce and maintained solid-filled shaded elements at flat angles called “Polygons”. The better way to say it, I-Robot was the world’s first commercial video game in history to use 3-D Polygon Graphics (or true 3D graphics) with no hidden objects, lines, or surfaces as opposed to prior 3D Arcades that used wireframe(vectors) graphics such as Battlezone, Tailgunner, and others. It was also the first commercial video game to have a camera angle and some lightning calculation (just not on every polygon). This game was a commercial failure, as many arcade goers at the time didn’t know what to do or think of it as they could not handle the surrealism the new gameplay featured and especially the games new groundbreaking graphics deemed too ahead time. It was a departure from traditional arcade gameplay such as pac-man, centipede, galaga. If this game didn’t exist, games such as Hard Drivin’, S.T.U.N. Runner, Hydro Thunder, Rolling Extreme, Virtua Fighter, Tekken, and Star Fox would have never existed. That human like boss reminds me so much like the boss from the SNES game “Star Fox”. This game was very influential on today’s modern gaming (consoles and modern arcade games). If this game had been commercially successful, it would have started the full 3D polygonal revolution in arcades (and/or possibly consoles) much faster in the 80s instead of starting it in the late 80s/early 90s.